How is the tattoo removal with laser implemented?

The most healthy technique among the tattoo removal techniques is the one that is realized by laser tattoo removal. The inks used for the tattoos contain a lot of heavy metal. The most healthy way to remove the heavy metals that are so big that they can not be removed by white blood cell is high laser energy. High laser energy is absorved by the selector pigment cells and cause them to be exploded and destroyed. While the broken pigment pieces are thrown out from the body the other pigment cells are fallen down by the immune system. 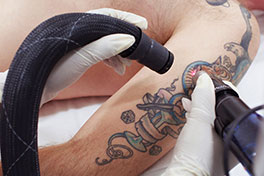 How many sessions does tattoo removal by laser take?

The number of the sessions depend on the size of the tattoo, the quality of the dye, the layer of the skin on which the tattoo is placed and the area of the tattoo. The removal that takes 5-8 sessions on average is implemented with the intervals of 1 month. It is possible to destroy only some part of the tattoo pigment in each sessions.

The easiest tattoos to remove are the ones that are older than 5 years old. Especially the tattoo that have dark colours like black can be removed more fastly comparing with the other colour because they can absorve the light more than the others. Since this tolerance is higher for the coloured tattoos the process can take 1-2 sessions more. Within the opportunities that the technology provides us now it is possible to remove tattoos with any colour including lip contour and eyebrow contour.

Which period of time is best for tattoo removal?

Tattoo removal with laser can be realized in any season. After the sessions realized in summer the implementation area must be protected from the sun until it takes the crusts out.

Does tattoo removal with laser hurt? Will any scar remain?

It is normal to feel the same pain felt while making a tattoo also while removing it. But the quantity of the pain is in minimum level. Therefore it would be wrong to say that tattoo removal hurts.

Although the chest, upper arm and foot wrist tend to have scar the risk porcentage is less then %5.

What to do after tattoo removal with laser?

After the sessions the patient must maintain the area moistured in order to have crusts more fastly. Thus the patient is recommended pomatum. However the pomatum must not contain silver in order not to constitute a risk in case of the contact with sun.

Hi I want to remove my lip contour